Last night we put a rough itinerary together for the next few days and investigated the public transport available. The Paris Metro was fairly easy to navigate and it seemed to cover all the destinations we required, so we decided to buy a 3 day pass for 24 Euro or about $36 AUD each – not bad value at $12 AUD a day.

We strolled the 5 minute walk from the apartment to the Metro, stopping to buy some breakfast treats at the local boulangerie before buying our tickets and making our way to our first stop of the day – The Louvre.

Over the last few weeks we had struggled to get a clear idea of the best way to purchase our tickets to the Louvre. There was conflicting information regarding whether it was best to buy them online or at the Museum itself. We had two concerns, the first that even if we bought them online we couldn’t print them off, you have to pick them up from the shop – like a Ticketek situation. The second concern was that we didn’t have a lot of time to waste trying to find the store and then get back to the Museum.

So we made the decision to get to the Louvre early and try our luck. The Louvre opens at 9am and we were there at about 8am so had plenty of time to get in line and see the spectacular surrounds. The best thing is that as the sun rises, it bathes the centuries-old buildings in pure gold. The sight is amazing and worth standing in line, even just to see that. 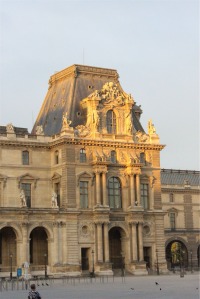 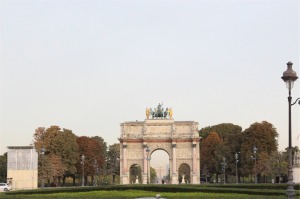 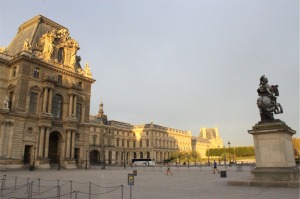 Now, if you want the hot tip on how to see the Louvre, we highly recommend getting there early and lining up. Even if you have a ticket, you still want to be one of the first people through the gates.

The most famous work of art at the Louvre would have to be the Mona Lisa. Bec quickly cottoned on to what the couple in front of us were planning, they discussed what they were each doing as soon as the gates opened, they seemed to have a great plan and so we followed the American couple as they went straight to the ticket office, bought our tickets and then followed closely on their heels as they walked swiftly to the Mona Lisa. We got a front row view of this amazing piece of art and with hardly any one about. This has to be the best way to see her as we walked past later and saw the room packed shoulder to shoulder where the best view you can get is obscured by selfie sticks.

So maybe the Mona Lisa is the most famous, but the sheer volume of outstanding works of art in the Louvre is bordering on insane. There is too much to see and you could spend a week wandering around the halls and still not see everything. Below are some photos of some examples – The Winged Victory, The Mona Lisa, Diana the Huntress, detail of the ceilings as you walk through and lastly the Venus de Milo. 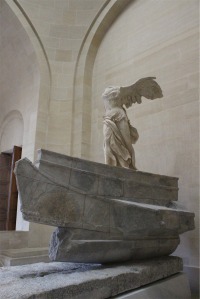 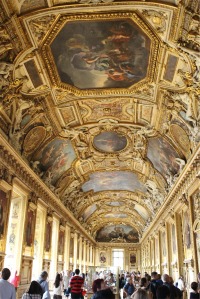 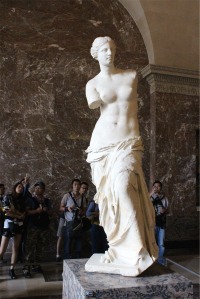 We stopped for a coffee at the cafe in the Louvre, looking out over the Napoleon Courtyard is a work of art in itself.

With our heads spinning and smiles on our faces, it was time to set out see more of Paris. The next stop on our itinerary was La Madeleine, which we decided to walk to. We stopped for lunch and saw amazing things on the way, including Our Lady of the Assumption Church. 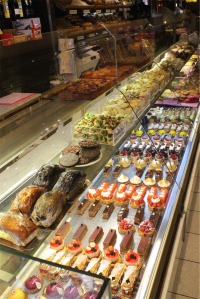 La Madeleine is a Roman Catholic Church, originally designed as a temple in the glory of Napoleon’s Army. It was absolutely spectacular inside, the ceiling art, sculptures and use of lighting in this huge building was breathtaking. 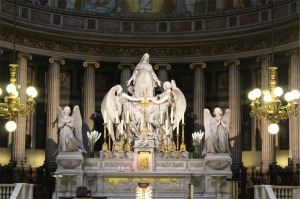 From La Madeleine we walked down to the place d la Concorde. The first photo below is the view from the front steps of La Madeleine to the Obelisk. It was a very busy road and we saw some of the crazy Parisian driving we had been told about! 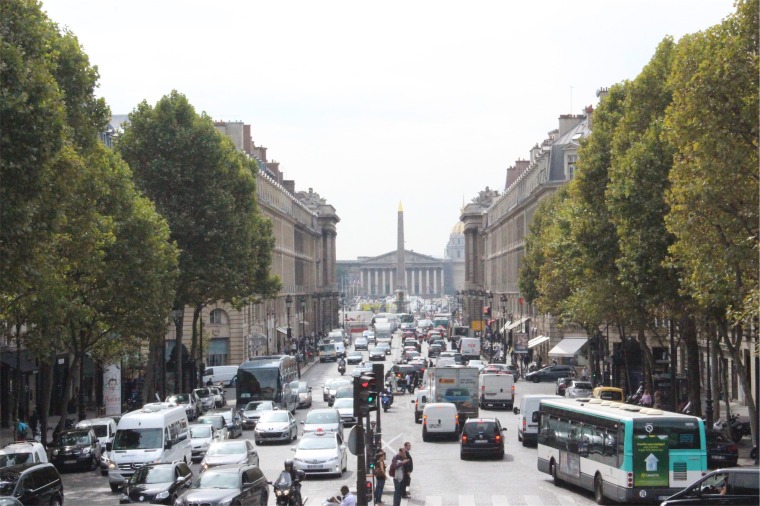 The Place de la Concorde is the largest square in Paris, the sheer size of it, the number of sculptures and history was spectacular. Below are pictures of the Fountain of River Commerce and Navigation and the Obelisk of Luxor.

One of the most amazing elements of the Place de la Concorde is the view – we could see the beginning of the Champs de Elysees with Arc de Triomphe in the distance, the Louvre behind us and even more amazing buildings across the Seine. The Champs de Elysees is possibly the most famous street in Paris, if not in the world so we made our way down this iconic stretch.

Along the way,  we came across the Grand and Petit Palais and decided to detour briefly to have a better look at these unbelievable buildings. While exploring, we were surprised to see a statue of Winston Churchill and a magnificent bridge.

The bridge was called the Pont Alexandre III.

It has gold statues atop massive pillars, views of the Eiffel Tower and even an Ice Cream Man! The Ice Cream Man sold cones out of the back of his specially modified car and loved having a chat even more than he loved being a third generation Ice Cream Man. 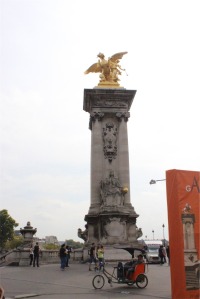 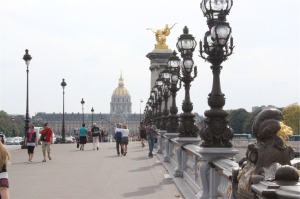 Keith is a huge Star Wars fan and before we left on our trip he found the t-shirt in the picture below. We were both stupid with excitement about getting this picture! 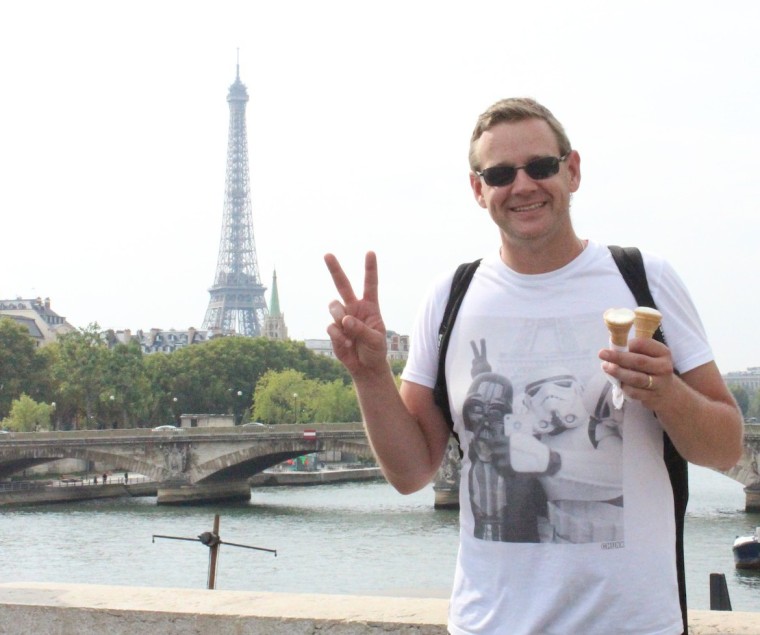 The Arc De Triomphe is also a famous monument in Paris and we could see it in the distance. The only thing that separated us from the giant arch way was hundreds of designer shops on the famous Champs de Elysees. Many other people had the same idea – the street was packed, but lots of fun to check out the shops.

The Arc de Triomphe honours those who fought and died for France in the French Revolutionary and the Napoleonic Wars, with the names of all French victories and generals inscribed on its inner and outer surfaces. Beneath its vault lies the Tomb of the Unknown Soldier from World War I.

Next on our shortlist was the Eiffel Tower. It was quite a walk from where we were so we got back on the Metro. Making our way up from the (underground) Metro, the view from the Trocadero Gardens was superb! We walked around the Eiffel Tower to take more photos from different angles. 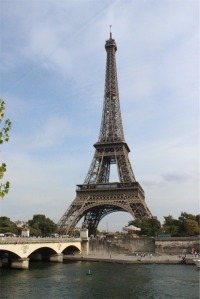 It had already been a huge day, but we still had a couple more famous landmarks to see. After a well deserved coffee break we again got on the Metro and headed towards the Pantheon.

After looking through the Pantheon we noticed the Saint-Étienne-du-Mont across the road, Paris is full of old historic buildings such as this, the history and amazing architecture was fantastic. 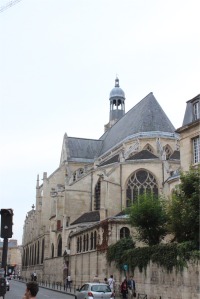 After we left the Pantheon, we headed down hill through the Sorbonne to the Ile de la Cite, an island in the middle of the Seine river. This is a very special island that holds the famous Notre Dame Cathedral.  We crossed over one of the many beautiful bridges connecting the island with the rest of Paris and were just blown away by how impressive the cathedral was. Below are some photos of the Notre Dame Cathedral and some of the bridges that lead to it, for example the Pont de l’Archevêché and Pont Notre Dame. 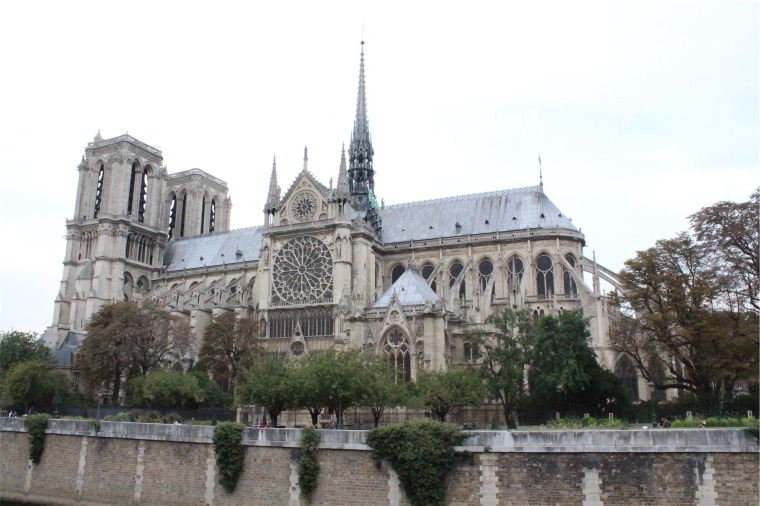 Since we had such a long day – it was now getting close to 12 hours of walking around Paris – unfortunately we were unable to actually see inside Notre Dame.

We continued on across the island and found ourselves in front of the Town Hall (Hotel de Ville). It was an amazing building with a huge plaza out the front of it. We also found a Metro station that promised to take us home to rest our weary feet.

Once back at the apartment we decided to utilise the kitchen for a home cooked meal, it would be some time before we could cook for ourselves again, as once we left Paris and went back to the UK we were staying in hotels each night.