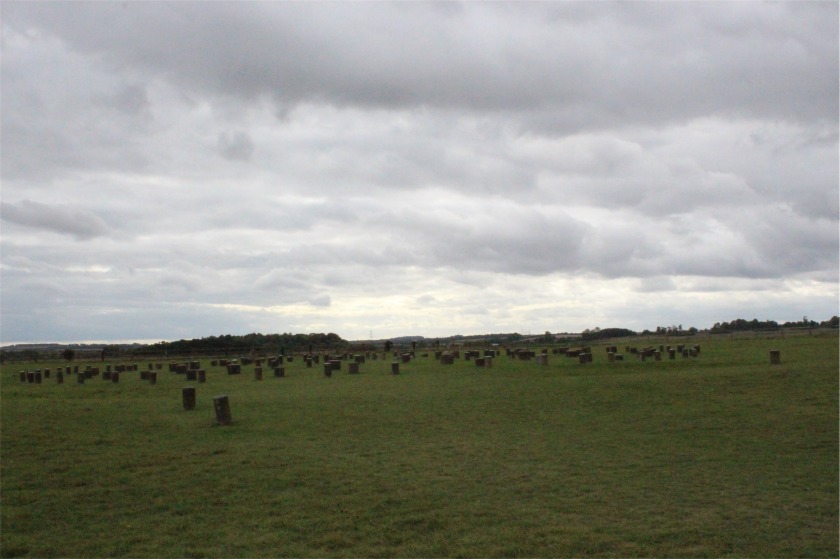 This morning we set out from Liverpool with a five hour drive ahead of us. Stonehenge was the destination, but we were hoping to see a lot of the English countryside on our drive.

Unfortunately since we had to make pretty good time there wasn’t a lot of stops along the way and hardly any photos. There were two stops worth mentioning, however.

The first was in a rest area in the Cotswolds – a massive forest area that is particularly beautiful and breathtaking. The rest stop was on a hill so we got to see right out over the forest.

The second stop was something we really hoped we would find – Devonshire teas. We came across a little house on the edge of the Cotswolds that had a sign out the front for Devonshire teas. We found a shed converted to a kitchen and cafe with the owner serving home made…. well, everything. We sat outside in his yard and enjoyed the most English thing we could.

Bec enjoyed motoring around in the Audi A4 – the roads were smooth, the countryside beautiful and the car a treat. We finally realised we were very close to Stonehenge so we pulled over to check our notes and we surprised to see… 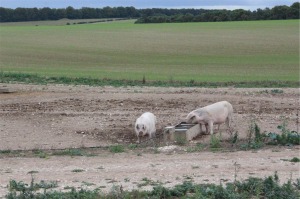 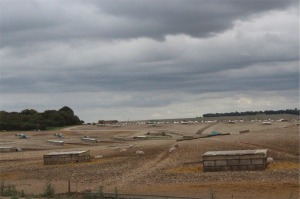 A pig farm! There were massive pigs right there on the side of the road with a HUGE amount of space to run around. They looked really happy, actually, but we’d never seen bacon in it’s natural habitat before.

Around the corner, we found our way to the visitors centre of one of the most well known, oldest monuments in the world – Stonehenge.

We parked the car at the visitors centre. A shuttle service runs from the centre to the stone circle, stopping off halfway to allow visitors the opportunity to walk the remaining stretch if they wish. It cost us 30 pound (AUD$60) to enter the site which included the shuttle. 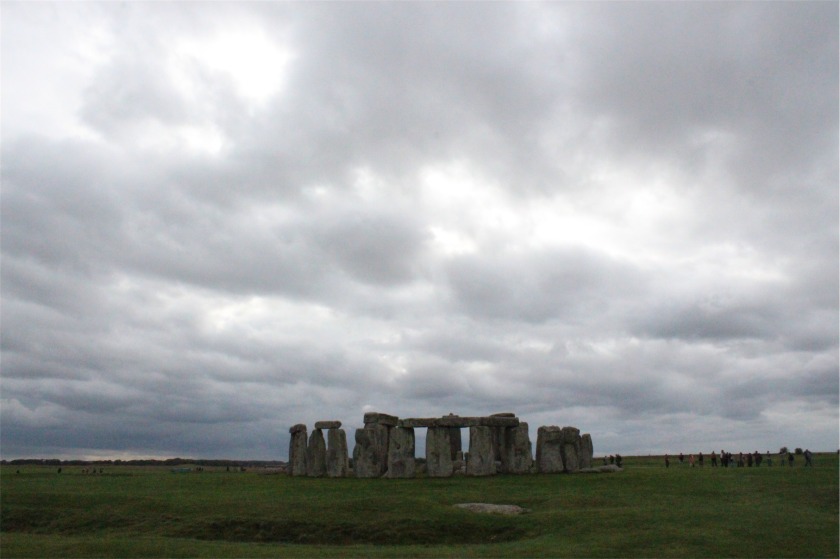 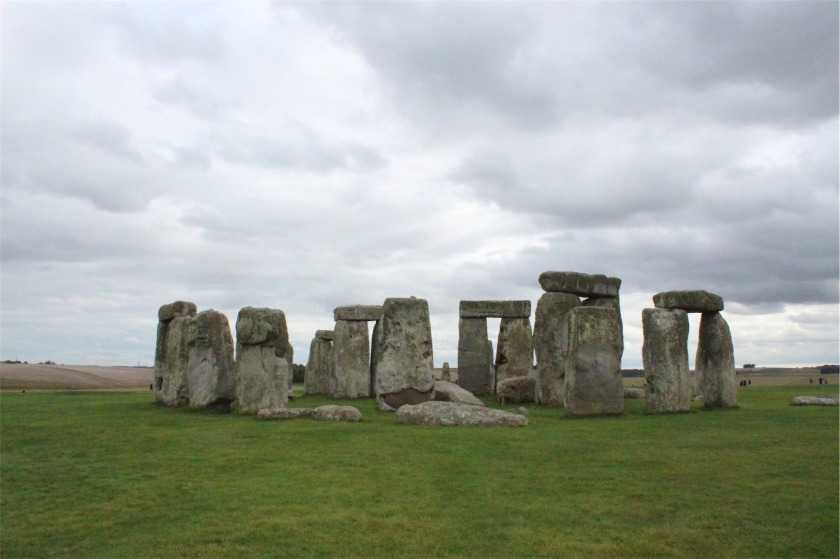 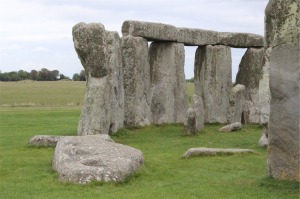 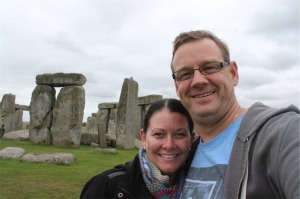 After exploring the stone circle, we headed back to the centre to see the exhibitions. In the photo below are replicas of dwellings. It is believed that the people who built Stonehenge would have lived in something similar over four and a half thousand years ago. 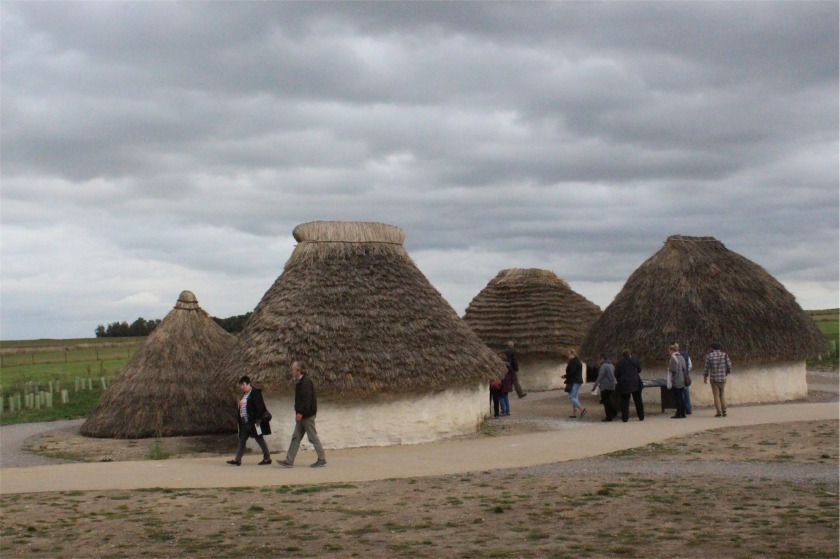 We explored the new visitor centre, opened in December 2013. It houses permanent and temporary exhibitions, including nearly 300 archaeological treasures found buried at the site – from jewellery to pottery to human remains – as well as a gallery, a gift shop and a cafe.

Once we were over the awe of this amazing relic, we had to leave to return the car in London. Only a stone’s throw away and on route to London was a small place that wasn’t well maintained or sign posted called Woodhenge. It seemed interesting so we pulled over for a quick look.

Estimated to be built about 2300 BC, it was originally believed to be the remains of a large burial mound, surrounded by a bank and ditch almost completely destroyed by ploughing. Aerial photography detected rings of dark spots in a crop of wheat, and today concrete markers replace the six concentric rings of timber posts which are believed to have once supported a ring-shaped building. 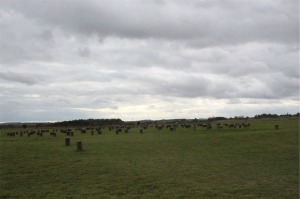 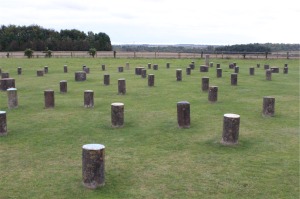 Once we set off for London, we only had about an hour or so before we reached our next destination – Ascot Racecourse. This was the last item on our James Bond filming locations list. Since it was closed and we were on a tight schedule, we just took the photo opportunity and then headed off to return the car. 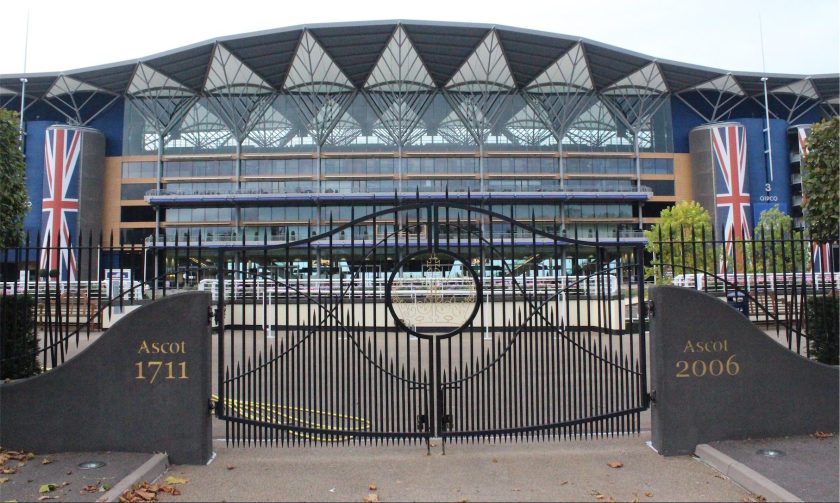 After dropping off the car we checked back in to the hotel where it all began – the Ibis at Euston St Pancras.