Our destination today was Geiranger via a number of Stave Churches.

The first was the Ringebu Stave Church only 45 minutes away. Built in approximately 1220, the distinctive red tower was added during renovations in the 17th century.

The church is surrounded by beautiful hills and farmland. It is immaculately maintained with almost every grave in the grounds planted with a tiny garden. 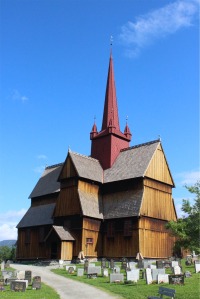 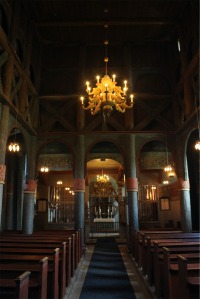 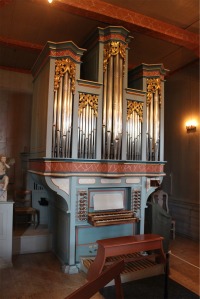 Our next stop was the Kvam Church. Although not a stave church, it was built using timber in the stave church style. Rebuilt in 1952 it was destroyed in April 1940 during fighting between German and British forces, as were over one hundred houses in the town. All that remains of the old church is a small church bell, the spire, and a door.

In the cemetery in the surrounding grounds there is a memorial to those British soldiers that were killed here.

We stopped at the town of Otta to have some morning tea. Walking along the banks of the beautiful Otta River gave a chance to stretch our legs.

It was only a 30 minute drive from Otta to the Vågå Church, but we stopped a few times to take some photos of this stunning area.

The Vågå Church is believed to date back to the 12th century but was renovated considerably during 1630. The Church contains a baptismal font made of soapstone from the 12th century and a large crucifix from the Middle Ages. The church graveyard contains many unique headstones in wood and soapstone. Near the church is the belfry which was built in the 19th century. 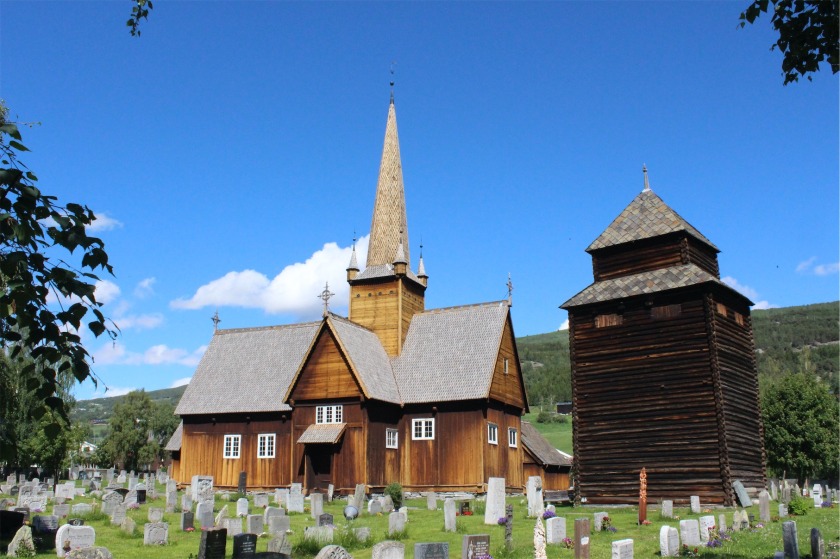 Lom Stave Church (Lomskyrkja) is one of the biggest and most beautiful stave churches in Norway.

Dating back to 1158-59 it remains the main church in Lom. As with all of the historical churches over time restoration, extension and archeological excavations have taken place. In 1973 there were a couple of interesting finds at the church –  more than 2,000 coins and a love message carved in runes on a stick.

As we walked into the church grounds we were amazed to see a robotic lawn mower. It was an interesting location and we took our time looking at the old graves whilst avoiding the sprinklers. 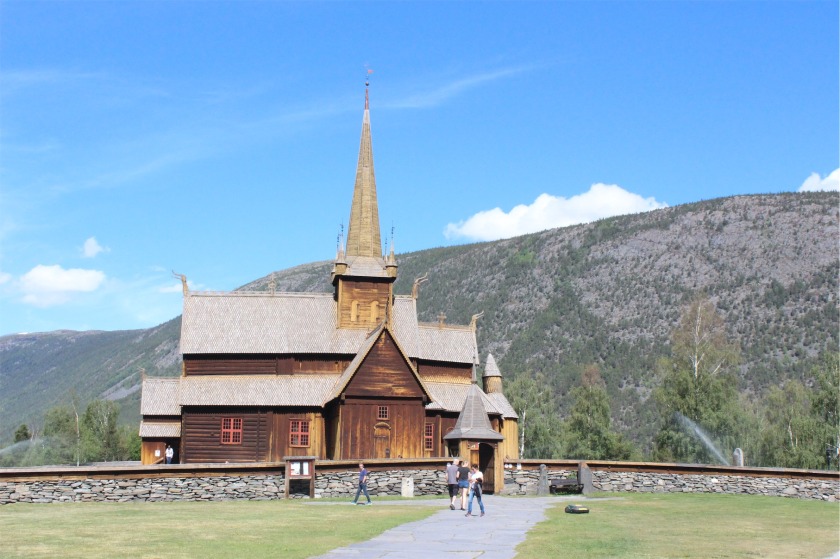 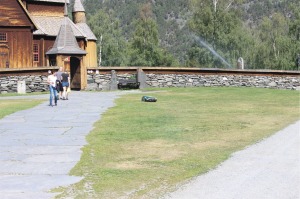 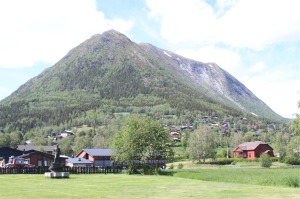 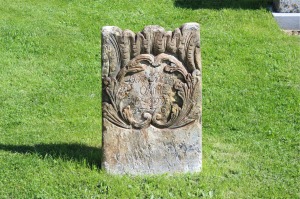 We continued on our way to Geiranger, stopping for lunch just outside Nordberg at a wonderful rest stop known as ‘Heggjebottvatnet Rasteplass’. It was a gorgeous spot where we enjoyed looking at the snow capped mountains we were heading towards.

Our destination was the Geiranger Mountain which was only about an hour from our rest stop on road 63. The landscape soon changed to rocky mountains, icy lakes and snow. 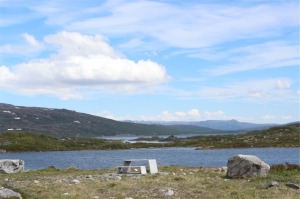 We had pre paid our entry to the toll road, Nibbevegen, which takes you on a winding 20 minute journey ending at the spectacular platform, Geiranger Skywalk. On top of  Dalsnibba Mountain located 1500m above sea level the skywalk has great views of the world heritage fjord and snow covered mountains. 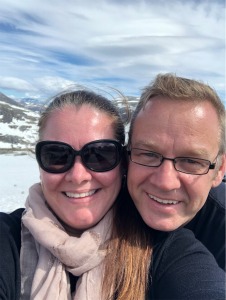 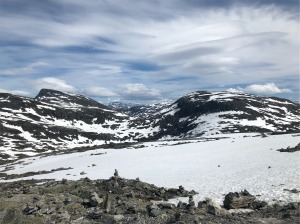 We took some video on the iPhone driving down the Mountain Plateau.

Down the mountain towards Geiranger and only 30 minutes away is the Flydalsjuvet Viewing Platform. It too provides incredible views. It was very busy, loads of tourist buses and tourists and we watched some of them climb precariously down the mountain edge to get a photo. 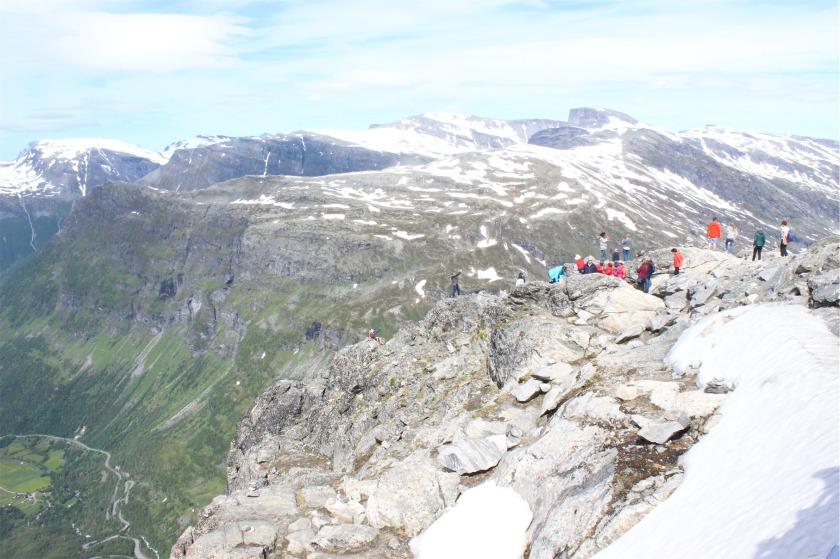 It has been a very long day and we were starting to get tired and a little hungry so we made the short drive down to Geiranger to check in to our hotel. Well, we hoped we would be.

There was a little concern about our reservation for tonight. When putting the itinerary together it seemed the entire town had been booked out! In fact, the only room that we could find was on a site we hadn’t used before or even heard of. Geiranger is an extremely popular destination and accomodation was expensive. We were taking a risk that perhaps this booking site was not legitimate.

Fully prepared to be told by reception staff that we didn’t have a valid room and that we’d be sleeping in the car we were delighted when they confirmed our paid booking.  We were a little taken aback when the reception staff, whilst asking us to complete some paperwork, rang his manager to advise VIP guests had arrived and that they were talking about us!

We were escorted to the Kongen Room (King Room) and advised our dinner and breakfast were part of the package whilst being shown around our suite! There was a large lounge room, king bedroom with balcony, private sauna and a spiral staircase leading up to our own roof top viewing platform – all with views of the Storfossen Waterfall and Geiranger Fjord (Geirangerfjorden). We didn’t know how this had happened, but we were not going to question it! When the manager left us we did a little happy dance and then enjoyed taking some photos of our fantastic view.

What an incredible day.