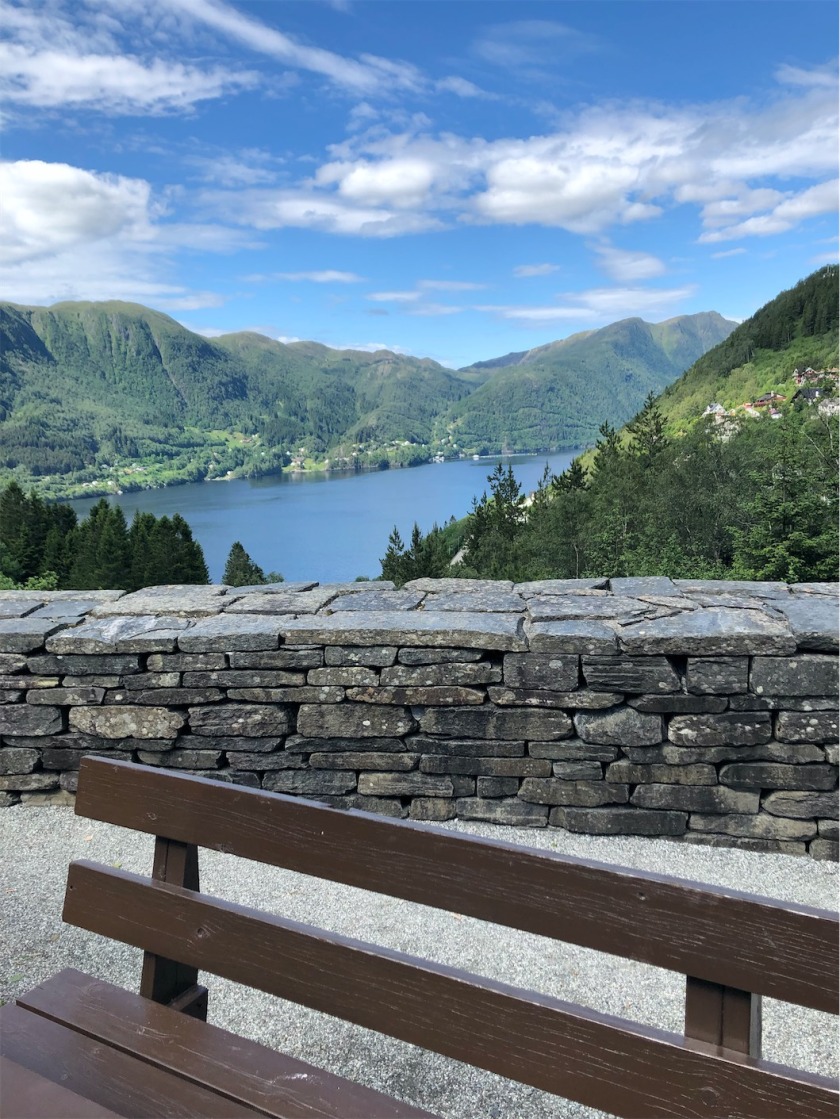 Our final destination today was Bergen and our journey took us by a number of well known waterfalls. This morning we woke up happy that the heavy rain overnight hadn’t fully cleared up. We felt that the rain would mean the waterfalls should definitely have plenty of water. 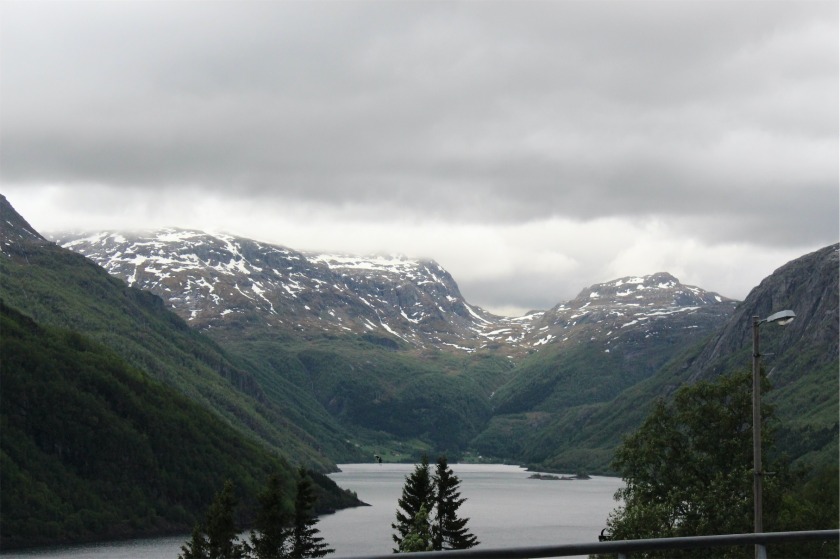 Norway’s geography is dominated by fjords and islands with lots of ferries and over 1000 tunnels linking this country’s road system. The development of this road system and the tunnels that take you through some huge mountains have not only unified the country from an accessibility perspective, but enhanced the tourism sector as travellers like us can road trip around the country with ease.

Our first tunnel today was only 10 minutes from the hotel, Røldalstunnelen and at just over 4.6km long it’s not even close to the longest tunnel we will experience on this trip.

Låtefossen was the first waterfall in the itinerary. The 95m (312 ft) tall waterfall is unique as it consists of two separate streams flowing down from Lake Lotevatnet. As they fall, they join together in the middle of the waterfall, just before going under the road, making for a spectacular view as you drive over the old stone, six-arched bridge. 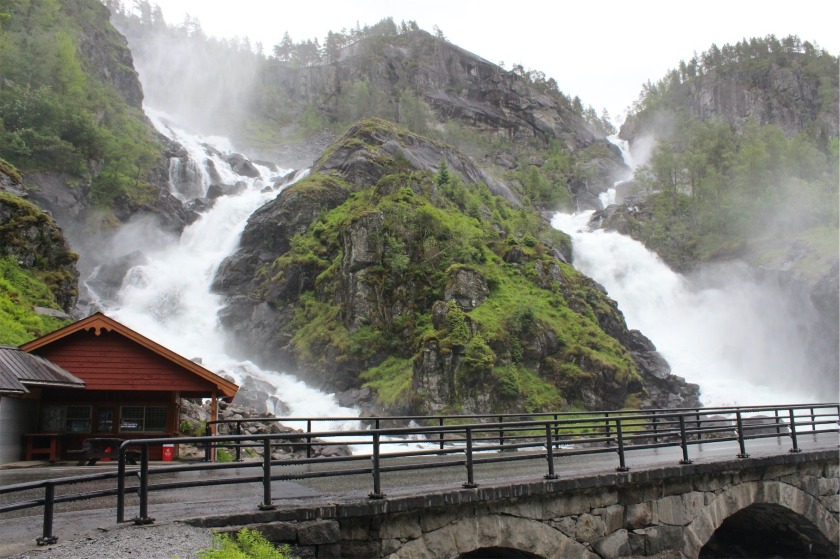 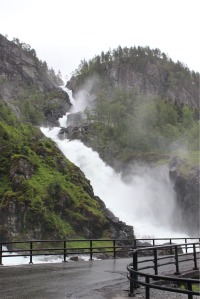 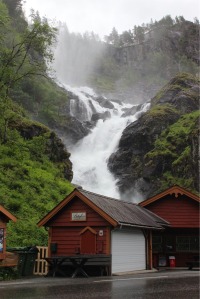 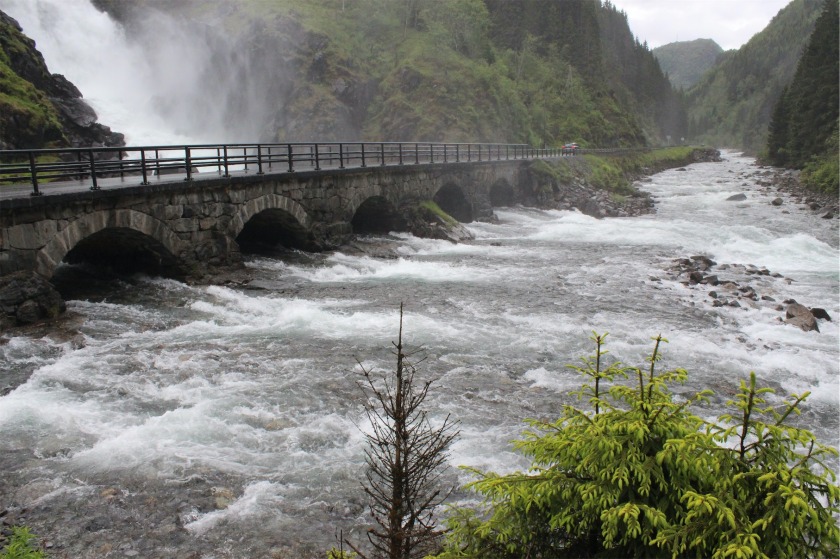 We followed the Grønsdalslona River on to Odda where we stopped to explore and stock up on supplies.

Half an hour after leaving Odda the weather cleared, the sun came out and we found the perfect spot to have our lunch. 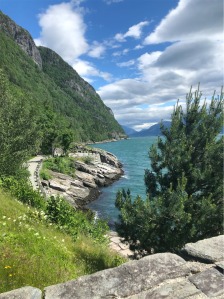 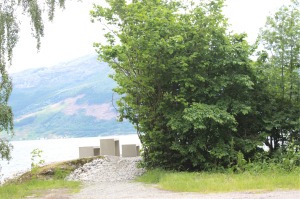 There are about 200 toll stations in Norway and whilst we have managed to avoid a lot of them, most of the bigger road projects and bridges are almost completely funded by tolls. This bridge cost 150NOK or approximately $24AUD to cross. It’s hard to imagine this sort of toll being accepted by the general public home in Australia.

The next stop on our itinerary was the Steinsdalsfossen Waterfall. It’s one the most visited tourist sites in Norway and is set out well for visitors with a large parking lot, some souvenir shops and good walking paths.

Steinsdalsfossen is 46 metres high with a main drop of 20 metres. What makes it even more special is that there is a path that enables you to walk behind the waterfall. 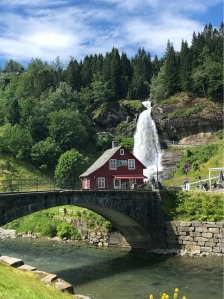 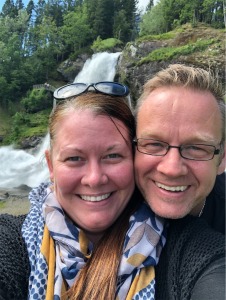 Only 20 minutes from Steinsdalsfossen toward Bergen is the last waterfall on our itinerary today, Fossen Bratte. 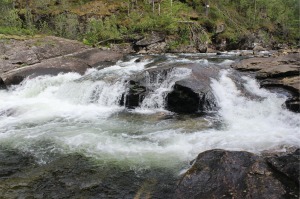 Our final stop today before arriving at our Airbnb in Bergen was the Fantoft Stave Church (Fantoft stavkirke).

Originally built in 1150, Fantoft Stave Church tragically fell victim to arson and was destroyed in 1992 allegedly by Black Metal musician Varg Vikernes. More information about this can be found in our previous blog about Oslo.

The reconstruction that stands in its place today was completed in 1997 and includes the original crucifix, which survived the fire. Although no longer listed as a historical building, it is a faithful representation of the sadly destroyed original.

There are a couple of different entry points to see the church so we made the walk through some gorgeous forest. 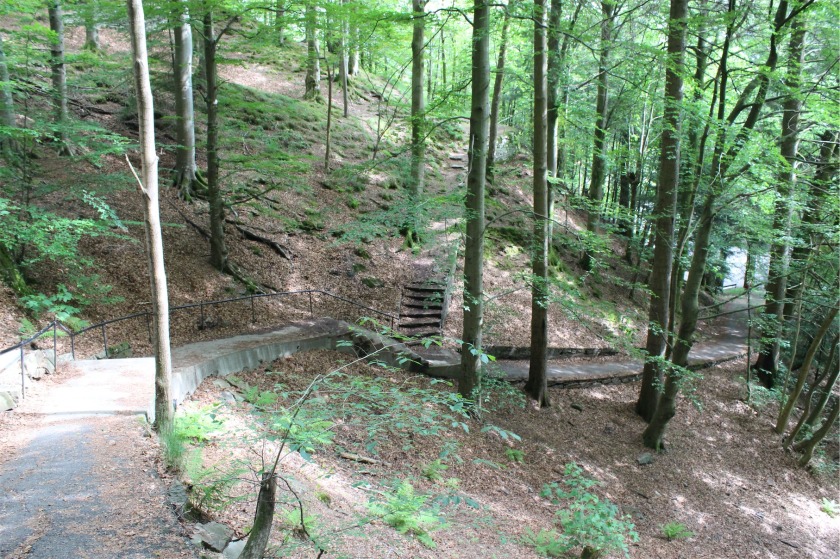 After what had turned into quite a long day we finally arrived at our Airbnb. We were delighted with the view we had from up in the hills overlooking across the Byfjorden. Deciding to take advantage of the extended daylight hours, we walked through the leafy path down the hill to get a bus into the city.

The bus dropped us near Vågen – the bay harbour in the centre of the city. It is home to many attractions such as fish markets and the very famous Bryggen also known as Tyskebryggen, a series of Hanseatic heritage commercial buildings dating back to 1100. 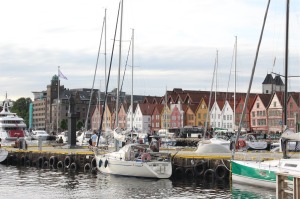 It was lovely weather and there were many people out catching up for drinks after work or dinner. We walked around and took in some of the major attractions and sights within walking distance, noting that we could see our Airbnb in the distance. 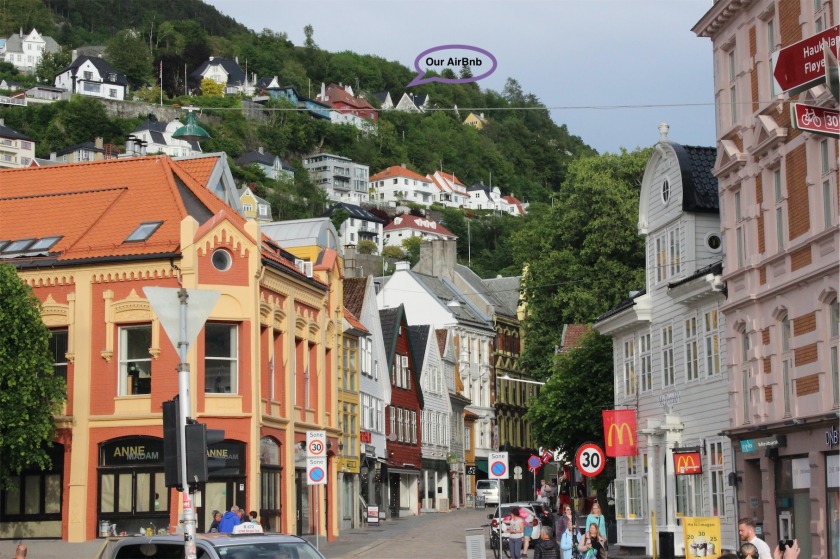 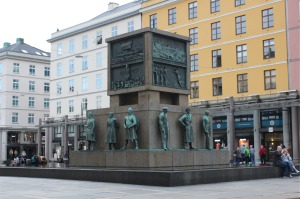 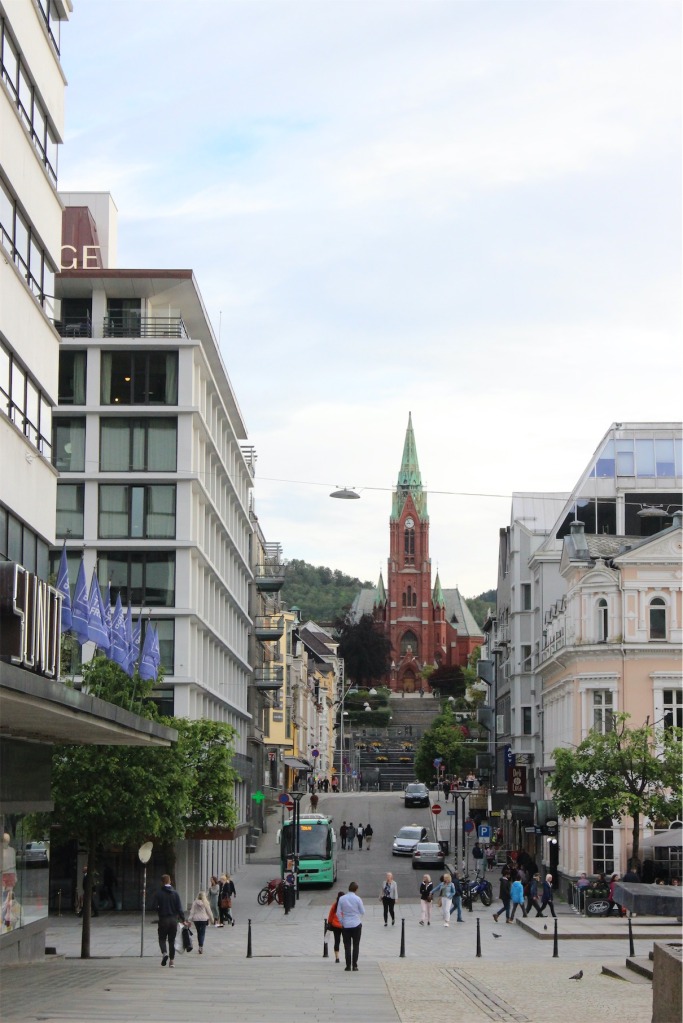 It had been a long day. We picked up some groceries and found somewhere to have a well deserved beverage or two and some dinner before getting the bus back to the Airbnb. 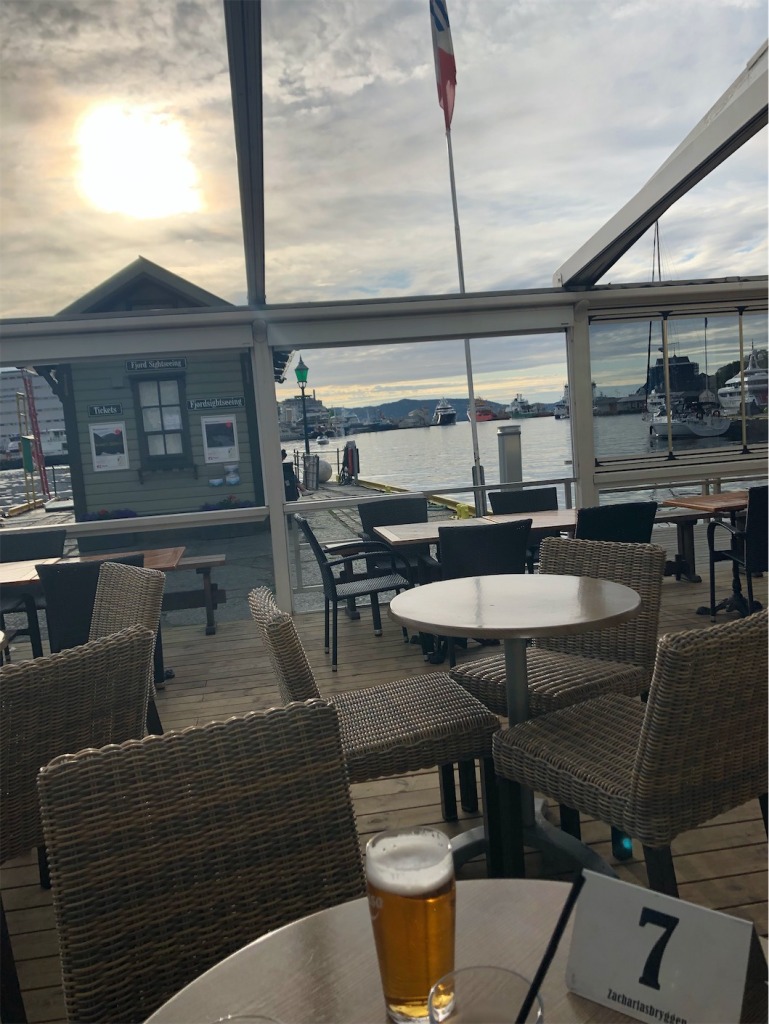