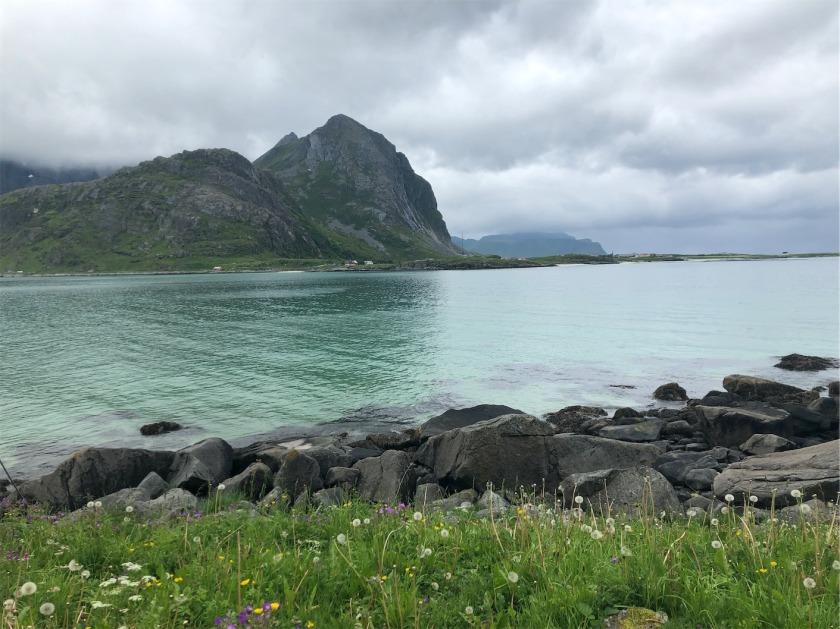 We had another night in our Airbnb here in Leknes and planned on spending the day exploring more of the Lofoten Islands. Sadly, the weather was really not cooperating and it was forecast to drizzle and rain all day. It was hard not to be disappointed, but anyone that knows Keith would understand that he makes it hard to focus on anything negative.

Our first stop was Ballstad, one of the largest fishing villages in the Lofoten Islands. 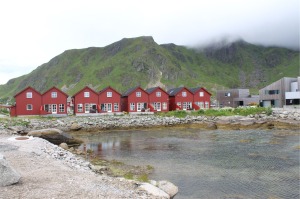 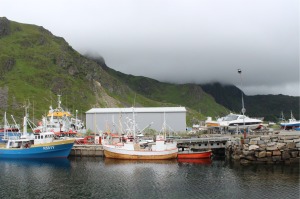 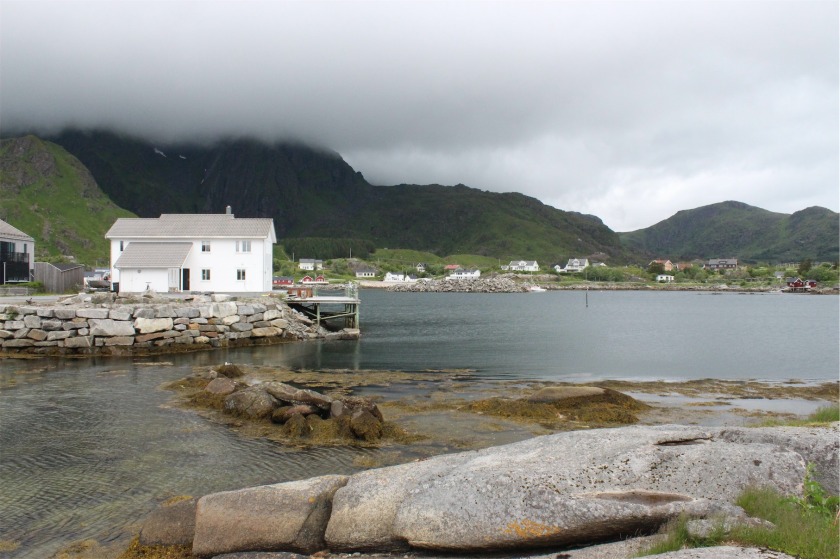 We drove through Haugveien on the way to Nusfjord, it was pristine coastline bordered by lovely wildflowers. 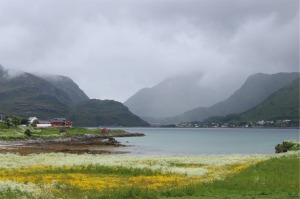 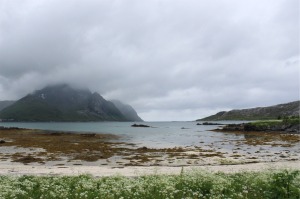 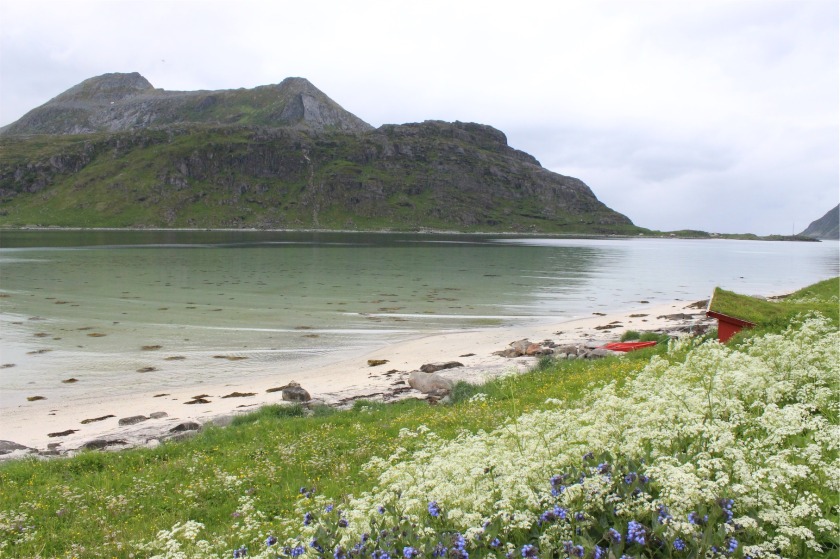 With evidence of people living in Nusfjord from 425 BC, it is often regarded as one of the oldest and best preserved fishing villages in Norway.

At one time Nusfjord was home to more than 1500 fishermen and many of the old buildings related to the fishing industry have been maintained. The fish oil factory, old smokery, blacksmith, boathouses and many other buildings provide a historical glimpse of the old Lofoten life.

We claimed the very last parking spot and took in the view from the car park. We then paid our entry fee of 100KR ($15AUD) each, were given a map and started to explore. 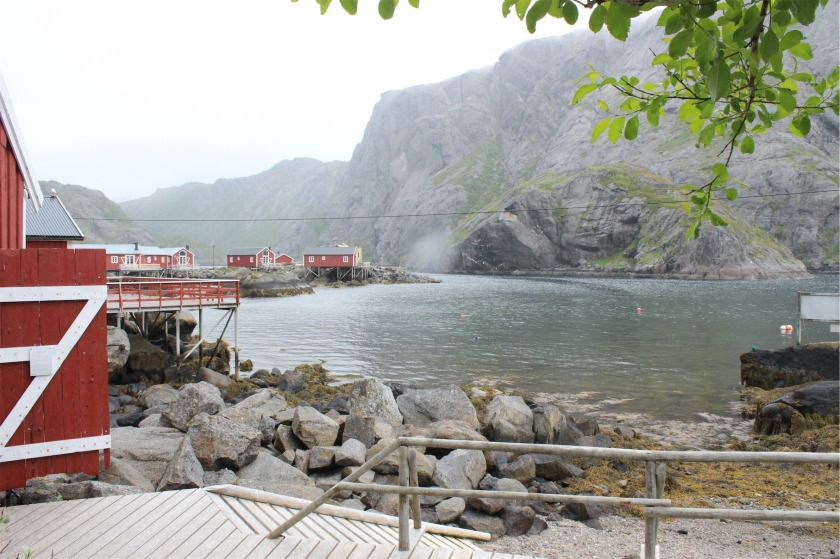 The red boat shed is one of the oldest remaining buildings in Nusfjord, built before 1877. The framework in this building is held together by old wooden plugs. The shed was originally used as storage for fishing equipment and small boats. 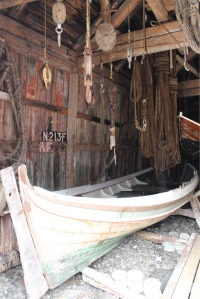 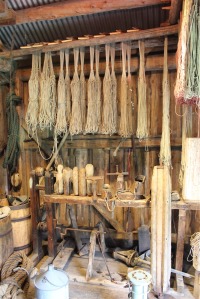 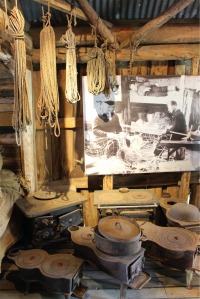 Despite the drizzle, we enjoyed the walk around the boardwalk on the banks of the fjord. 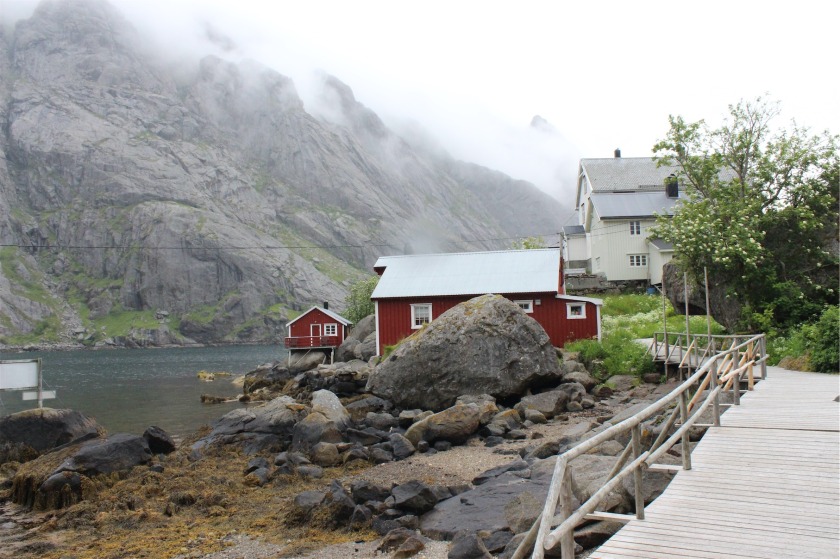 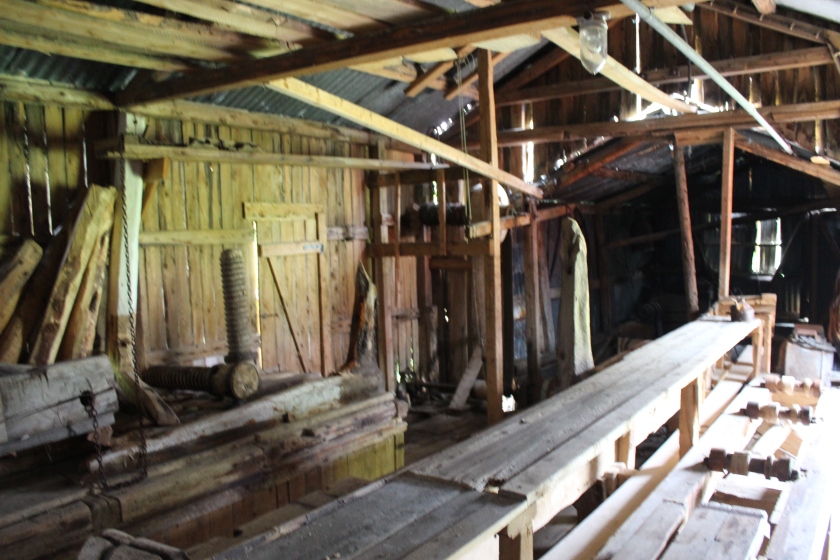 We made our way to the elevated harbour where a number of yachts and boats were moored. 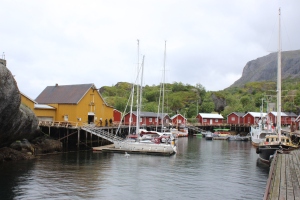 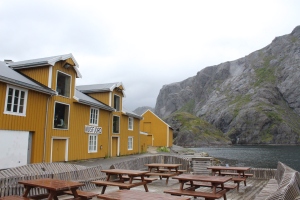 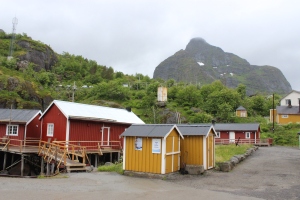 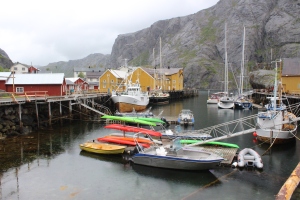 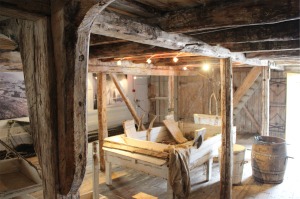 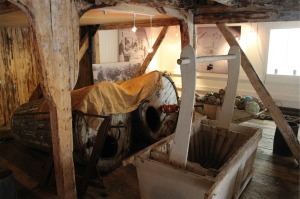 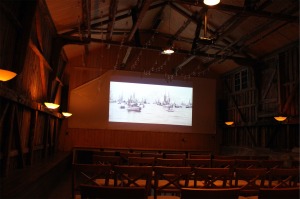 The refinery was built around 1910. This was where cod liver was turned into oil. The cod liver was bought to the landing station across the harbour and was brought to the refinery to be cooked. Cod liver oil was traditionally a very lucrative export product and was used predominately for medicinal purposes. We watched a short film on the history of the production of Cod Liver Oil in Nusfjord before making our way back to our car.

We spent the rest of the day exploring other parts of the islands including Fredvang, Ramberg, Sakrisoy, Reine and all the way to the furthest point – Å.

Unfortunately this is the best photo we could get of the famous Fredvang Bridges as the rain had well and truly set in by the time we got there. 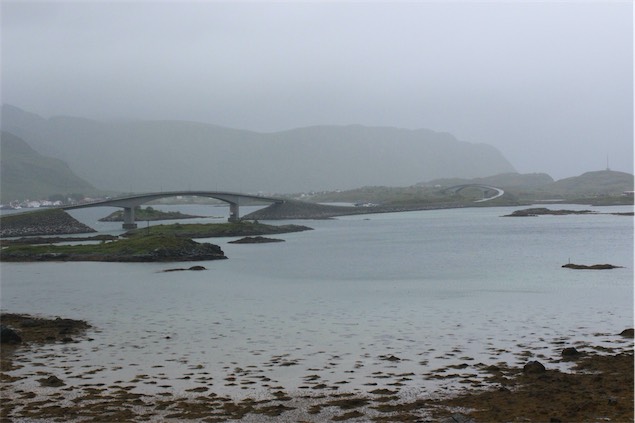 Stockfish is unsalted fish, most often cod, dried and preserved by cold air and wind on wooden racks (which are called “hjell” in Norway).

Stockfish remains a major export for this region and we saw loads of the traditional racks on our trip today. Many of the racks were bare or only had the fish heads remaining. We later found out that the heads are dried out further and sold to Nigerian markets where they are used in traditional cooking. 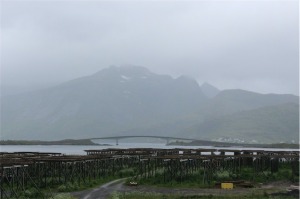 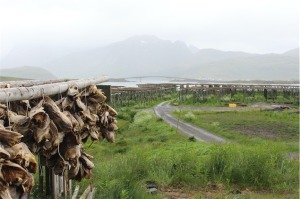 We were able to find two other sculptures, part of the Skulpturlandskap Nordland project. Below left, “Laurel Leaves-Moskenes” and right “Epitaph”. 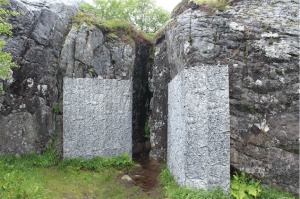 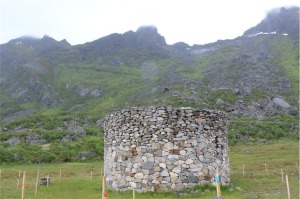 We stopped in at Anita’s Sjømat (Anita’s Seafood) in Sakrisøya for lunch. The decor was interesting as was the presentation of our fish burgers! 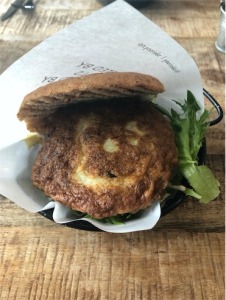 So, although the weather hadn’t been great and some of our sightseeing hadn’t gone to plan, we still had a good day. We had ticked off a major bucket list item by exploring the Lofoten Islands.