Waking up early in Bremen to beat the Saturday tourist crowd, we walked through the most gorgeous park Wallanlagen, and disturbed a few little rabbits having breakie! 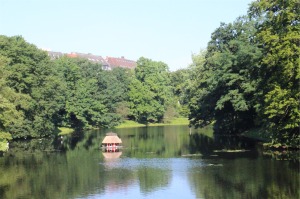 Bremen is surrounded by parks and is pretty flat, you can see everything for miles, as we walked out of the park we saw something very cool in the distance and walked towards it. This is the cutest little windmill we have seen so far – and we’ve just come from The Netherlands!

Walking into the Altstadt or Old Town, we were overwhelmed. The buildings, statues and sculptures were incredible. We spent a lot of time wandering around not knowing where to start, everywhere we looked there was so much to see.

When Keith was growing up his Mum read him a Brothers Grim story about the Bremen Town Musicians, it was on our shortlist to find the statue of the characters from the story. Not only did we find the famous statue, but a cute water feature as well. 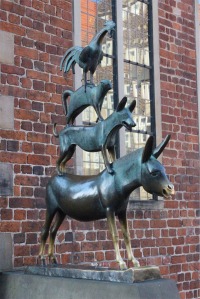 Sadly it was time to leave Bremen, like with Bruges we could have spent an entire week here it is definitely on the ‘favourites’ list.

The drive to Hannover was another trip where we decided to skip highways and do the back roads. We saw fields and fields of flowers where you could pull over on the side of the road, pick your flowers and purchase them using the old ‘honour system’.

The architecture of the local houses has started to change a little now as we head further East. The roofs appear to dwarf the houses and they are more slanted towards the ground.

We had the funniest experience when reaching our hotel in Hannover. We entered the underground carpark and there appeared to be no parks available. Preparing to do a 3-point turn to reverse we had to wait for another car that came in behind us. We were chatting away and realised that the car had disappeared! Keith got out to investigate, used his handy phone app ‘World Lens’ to translate a sign, and realised that there was an automatic lift that we had to use to go down to the next level. It was the strangest experience, driving in, the doors at the front and back closed and down we went!

Treated ourselves to a wine and beer in the hotel lounge and then crashed out, sightseeing in Hannover tomorrow.